UNISON Aberdeen City Branch welcomed the commitment today from the Administration Group to protect staff terms and conditions in the 2019/20 Council budget.

“We’re really pleased to hear that the Administration has blocked this cut after meeting us on this issue. Our members have been doing their best to support change, but the pressure is piling on and they don’t have much more to give. Changes to terms and conditions would have been the straw that broke the camel’s back. It’s not what our members signed up for.”

Councillors also made a continued commitment to no compulsory redundancies, a key demand from UNISON.

The 2019/20 Council budget means that 1 in 6 non-ringfenced jobs have been cut since 2017, totalling 780 council jobs. With Brexit looming and the slump in the Oil & Gas sector, it is vital that Aberdeen City Council doesn’t damage the local economy by putting more jobs at risk, either at the Council or its partners in the wider community. 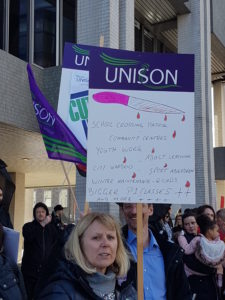 UNISON stood side-by-side with sister unions, community groups and the public at protests outside the Town House today. The display of solidarity from residents of the city showed the depth of feeling about the cuts to Aberdeen City Council’s budget.

Austerity from the UK government has continued to squeeze budgets for all public services. The Scottish Government has failed to use its tax raising powers to fill the gap. Local government funding in Scotland is fundamentally broken. In Aberdeen this is now hitting vulnerable people.

UNISON Aberdeen City have written to the Scottish Government Cabinet Secretary for Finance and the Constitution, Derek McKay, about the funding settlement for Aberdeen City Council. The letter stated:

UNISON supports the devolution of business rates to local councils, giving councillors the power to spend money raised in their areas. This year, Aberdeen City Council has lost £28m in business rates due to Scottish Government redistribution to other parts of Scotland.

Nonetheless, Aberdeen City Council failed to use the full powers available to it to raise the council tax. And after issuing a bond for £370m in 2016, the cost of servicing the debt has increased by another £9m this year.

“This budget strikes at the heart of a number of services in Aberdeen. Increasing charges for service like social care, cutting gritting in winter, and reducing youth work will be really damaging for the people of Aberdeen.

“We’ve written to the Scottish Government to outline our support for devolving business rates. We know that local councils face pressures to their grants. But as we head toward 780 job cuts in two years, our members are struggling to deliver the quality public services the people of this city expect. We need to see proper investment in our public services.”

UNISON is one of the UK’s largest trade unions, serving more than 1.3 million members. We represent full-time and part-time staff who provide public services, although they may be employed in both the public and private sectors.